On August 9th ReadBoston visited the West Zone Early Learning Center in Jamaica Plain to host a Book Scavenger Hunt. The West Zone is an ideal location for a Book Scavenger Hunt, because the school has a fenced in play area. The Book Scavenger Hunt was designed based on reading level. Picture books were hidden first throughout the play structure.  Level one books such as “Pete the Cat” were hidden is obvious places. Of course, “Diary of a Wimpy Kid” had be hidden in the garden. As soon as the books were hidden, the children were ready to hear their clues. We allowed the younger children to search first, which really built up the anticipation for the older readers. “No, no look over there in the grass!” said one older boy to a younger boy. It was great to see the children so focused on finding books and the reactions of the older children who patiently waited until it was their time to search. 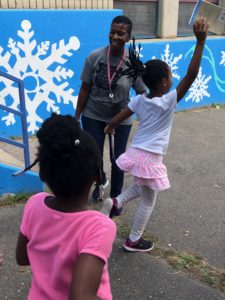 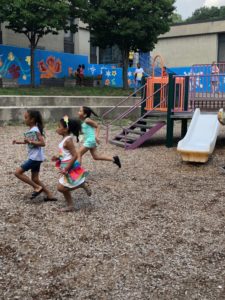 Kids at the Lena Park Community Center participated in a Book Scavenger Hunt on Friday August 10th. 60 children split into three groups and searched the Lena Park grounds for titles such as “Manic Magee” and “Last Stop on Market Street”. Once the Scavenger Hunt began, kids began sprinting in all directions to find books. Initially  a few children were not interested in searching for books, however once they saw their peers having such a good time finding books it did not take long before they joined in. The junior staff were great supporters of the event by reading the newly found books to the children. A Book Scavenger Hunt is a great way to generate excitement about books among young readers! 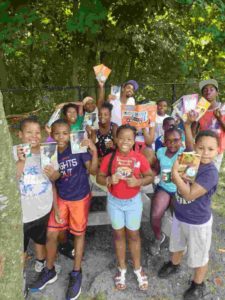 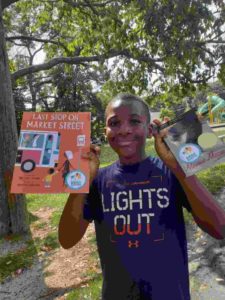 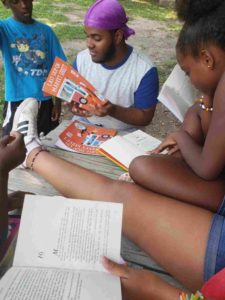